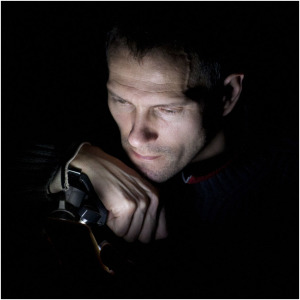 Born in 1965 in Paris, studied Dramatic Art at Paris 8 University then, in 1985, continued his training at Brighton Polytechnic, Department of Art & Design (University of Brighton, Sussex, U.K.) Here he followed an Arts course which led him to discover photography. At first an artistic support, this rapidly became the very means of his artistic expression, as is revealed in his photographs of Central Europe (Berlin, Leningrad/St Petersbourg, Prague, Budapest…). His work on urban lanscapes was, moreover, recompensed in 1989 by the ‘Ilford Black & White Prize’ for his shot of the deserted interior of the former Greek embassy in Berlin.

After obtaining an Upper Second Class Honours Bachelor of Arts Degree in Expressive Arts, he addresses statuary and the male nude, on which his taste, lighting and setting skills bestow a singular dimension.

In 2001 his work radically changes direction. He uses colour, the 4x5inch chamber and makes large size prints (80x100cm). These photographs, reworked on computer, shift against a deliberately explicit setting.

In 2010 he decides to take yet another direction. It is here that is born the idea of a body of photography around the most emblematic object of our epoch: the mobile phone. He now explores new fields such as the statuary and the male nude, to which his taste and skill for lighting and staging bring a singular dimension.

Is my photography gay?

Just as heterosexual photographers are inspired to capture the beauty they behold in women, so I shoot men. I claim this same inspiration of subject, even raise it as a banner. Should it be thought a virtue in one case and a vice in the other? If, as a viewer, I am moved by a photograph of a woman, why then

shouldn’t a heterosexual be moved by a picture of a man?  Perhaps, if he is given the opportunity to see.. I practise ‘gay’ photography as others practise ‘heterosexual’ photography. To quote Andy Warhol’s famous words: “Yes, so what? ”
Such labels, if thought restrictive, simply

illustrate their users’ own narrow mind, don’t they? It is about time that remaining true to oneself and being clear about it, that barriers be brought down.
That is why I am keen on exposing my work in exhibition places for the general public.

What’s said about me…

“Having studied drama before photography, Pascal Valu works with his models as a director. He likes setting his models in a theatrical environment, titillating the viewer’s imagination, setting him free to play with each picture as he wishes.
Playing with humour as well as with computer processes, he places his nudes in allusive and suggestive artificial sets. Since 2000, he has used colour, exploring fiction, storybook and

modelling fantasy. He delights in fitting into and having the audience fit mentally into his compositions, whether of a real or virtual expression. His playful digressions do not oppose his appreciation of male anatomies which he has shot in B&W for quite some time or his landscapes of aging bodies celebrated by a concordant light. It is when he is inspired by the body that Pascal Valu gives his best, in close-ups, levitation, transparency or in reference

to a perpetual dream, as in Sex Libris.
His photographic body, once a standard celebration of masculinity without pretence, has developed into one of entertaiment or illusions.”
June 2007